October 1st in the desert. Those of us who live here know that the last few months have been brutally hot. This heat tends to send things hibernating and the weak of heart only come here to escape their own weather when things cool down.  There are those who say there is no beauty in the desert. They say you can count on the heat and only two colors—the brown of the hard packed earth (and smog) and blue of the sky that for months and months won’t witness a cloud or rain.

A storm is coming.

They’re calling this one Rosa— I don’t know how they pick those names but I’m thanking Rosa this morning because she has brought clouds to the blue sky, rain to the brown and my ability to go out for a run today without fear of perishing from heat exhaustion. Temps have plummeted form 105 degrees to a mere 75 degrees today. It rained through the night and had stopped for now, but they’re predicting such tremendous precipitation that flooding is imminent for many communities. I’m not thinking 40 days or anything, but it sounds like it’ll last several days into this week.

Of course, before I could make it out the door, I had to rub the ointments on my foot for the pain, and I also had to don my prescription glasses in hopes of seeing where I’m going. (The desert in the summer AND this getting older thing isn’t for the weak of heart.)

Speaking of heart—You could say I’ve been struggling with joy in my heart these dog days of summer… As a Christian, we’re told (and I believe) that since we believe in Jesus Christ, we always have joy.  I carry that hope that I have eternity with Him to look forward to and it keeps me smiling and pushing on, but sometimes things of this world just get me down…It’s just not a “Joel Osteen”-kind of day today. And, with the way things looked last week in our nation, it’s not a “J.O.” kind of week.

I can point to a myriad of things getting me down besides how sad I am about how we treat each other:  the heat has been exhausting, that micro fracture in my foot that kept me from running for several weeks, the inability to see clearly without eyeglasses, the eye infection I am still struggling with caused by the devastating fires this summer, and all that training for a half-marathon that got cancelled because of the other hurricane (Florence.) And that storm also affected a friendship in my life — I don’t understand why, but it would seem that things beyond my control are pulling me down.

And my cat is sick. So, I turned to where I’ve found joy before; running and being outside in God’s earth.  I do believe He still speaks to and through His creation, so I went out for my run and was praying to God for a hopeful glimpse at some Joy….

About 2 miles in, the pain in my foot started to dissipate and I grew more aware of the things around me. I thought about the two colors of the desert—brown and the blue—But, as my focus shifted, the vision of the desert before me was alive with more colors than I could name! From Mr. Hensen’s Jr. high school science class, I remembered the acronym R.O.Y.G.B.I.V. The color spectrum with each letter representing a color that is illuminated in a rainbow.

“A rainbow is a meteorological phenomenon that is caused by reflection, refraction and dispersion of light in water droplets resulting in a spectrum of light appearing in the sky. It takes the form of a multicoloured circular arc. Rainbows caused by sunlight always appear in the section of sky directly opposite the sun.” – Wikipedia

And also from Wikipedia—“The rainbow is an important symbol in the Bible, representing a promise of peace from God to Noah…”

Even though there wasn’t enough sunshine today to create a real rainbow, I thought I would look for the representation of that in the colors around me.

So I put it out there— “Okay God, it would plant some joy in my heart to see ALL the colors of the rainbow.” —And I began focusing on things around me (instead of my pain…)

First there was the Red Baja Fairy Duster— (I just love the names of the plants in this desert)— Then there was the vivid orange blooms of the Honeysuckle. I didn’t see the Y – yellow, so I moved on to the G in green—Well, that was everywhere! Supporting the blooms on the leaves of all these lovely shrubs and plants, but also unlimited shades of it on all the Saguaro, Agave and Prickly Pear Cacti. And still, I found no B – Blue. I quickly located the Indigo and the Violet attracting all the bees and hummingbirds on the numerous blooms covering the Arizona Sage bushes. So, it just got down to needing to see some yellow and some blue. With each step and each color I could check off in the rainbow, I felt a little more of my Joy returning. 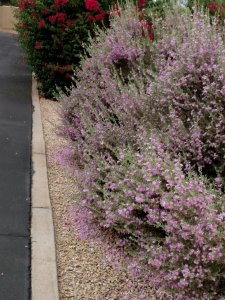 I decided to stop focusing on everything that was just on my side of the street, and as I looked to the other side, I found it!  A beautiful stucco home with yellow blooming Brittle Bush and Arizona Yellowbells punctuating it’s landscaping. 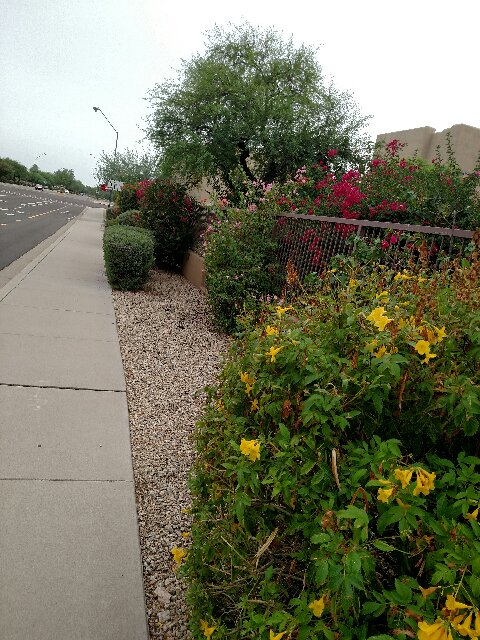 “Wow Lord,” I thought, these colors are amazing, BUT I still hadn’t seen blue yet…

However, as I continued on, I was mesmerized by mom many more colors—the bright pinks and fuchsias of the Oleanders and Bouganvilia and adorable little white blooms of the Flattop Buckwheat. But I was still holding out for the blue.

And then, no lie, a blue car drove by. I laughed — “Really, God?” Then I doubted. Was that really blue?—It was really more gray.  I’m not counting it. I continued on… But my throat was bubbly with the tinges of that laughter, my feet were lighter; I felt supported by everything around me. My vision of the world started to look brighter, even though the clouds of Rosa continue to build in the sky.

I was about 4 blocks away from my destination and a bright blue Nissan SUV pulled out into the road- traveling the same direction I was going. I had to laugh again. Okay that’s for sure blue. No mistaking that.  I even looked it up—Nissan calls that color-CASPIAN BLUE.

Then I thought, “Is this really God speaking to me through all these little things? Am I just looking for God to speak to me to lift me up??!”

Earlier this week I saw this quote from Fred Rogers…

“When I was a boy and I would see scary things in the news, my mother would say to me, “Look for the helpers. You will always find people who are helping.”

I believe there are scary things in the news, but, like Mr. Rogers, I believe in looking for the helpers. I believe what I believe. The more I thought about my search for ROY G BIV to provide me with hope, the more I realized what I was missing.

The Blue. It’s always been there—One of the two colors we’re most known for here in the desert southwest-that brown and blue. The sky, now temporarily masked in white and grey clouds bringing the impending storm, yet most always can be counted on to reflect it’s blue in Arizona.

I guess the question is, “What do you look for?” 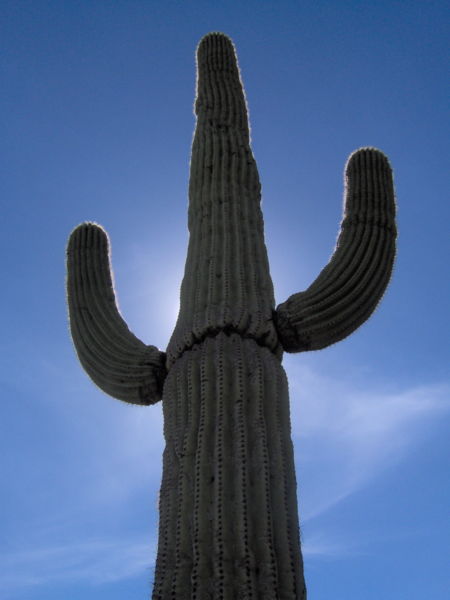